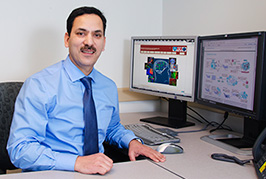 Dr. Khalid Shah is the Vice Chair of Research for the Department of Neurosurgery at BWH and a Professor at Harvard Medical School. He directs The Center for Stem and Translational Immunotherapy and also a joint Center of Excellence in Biomedicine. He is also the Principal Faculty at Harvard Stem Cell Institute in Boston.

Dr. Khalid Shah and his team have pioneered major developments in the Stem Cell therapy field, successfully developing experimental models to understand basic cancer biology and therapeutic stem cells for cancer. These studies have been published in a number of very high impact journals like Nature Neuroscience, PNAS, Nature Reviews Cancer, JNCI, Stem Cells and Lancet Oncology. Dr. Khalid Shah’s stem cell work has caught the attention in the public domain and as such it has been highlighted in the media world-wide including features on BBC and CNN. Recently, Dr. Khalid Shah’s laboratory has reverse engineered cancer cells using CRISPR/Cas9 technology and utilized them as therapeutics to treat cancer. This work was published in journal Science Translation Medicine and highlighted world-wide including features on Scientific American, New York Times and NPR. Amongst Dr. Khalid Shah’s published works are two books featuring groundbreaking insights into stem cell therapies for cancer, Stem Cell Therapeutics for Cancer (Wiley-Blackwell), and Mesenchymal Stem Cells in Cancer Therapy (Elsevier).

The potential of developing novel cancer therapies by him and his team has been recognized by many cancer alliances and associations. Based on this, he has received the young investigator award from Alliance for cancer gene therapy (ACGT), Research fellow award from American Cancer Society (ACS), Distinguished research award from Academy of Radiology and Innovation awards from James McDonnell Foundation, American Brain Tumor Association (ABTA) and Goldhirsh foundation. Recently he has received Department of Defense Idea and Impact awards for his work on treating metastatic brain tumors. Dr. Shah has often been invited to serve as a grant reviewer for the NIH and has reviewed applications to granting agencies in the US, Australia, and United Kingdom, such as the European Science Foundation, the Welcome Trust, the Samantha Dickson Brain Tumour Trust, and the California Institute of Regenerative Medicine.  Additionally, Dr. Khalid Shah has participated in the training of numerous undergraduate, graduate students and residents who have come from across the US and from 40 foreign countries. He has also received many awards for his mentorship including Young Mentor Award from Harvard University

Dr. Khalid Shah holds current positions on numerous councils, advisory and editorial boards in the fields of Cell therapy and Oncology. He has presented his findings for more than 300 academic seminars worldwide and in recent years has given various keynote lectures on Innovation and Translation of biological therapies. Dr. Khalid Shah currently holds more than 10 patents and he has founded two biotech companies whose main objective is the clinical translation of therapeutic cells in cancer patients.

Dr. Khalid Shah owns equity in and is a member of the Board of Directors, AMASA Therapeutics, Inc., a company developing cell-based therapies for cancer. His interests were reviewed and are managed by Brigham and Women’s Hospital and Partners HealthCare in accordance with their conflict of interest policies.

Dr. Khalid Shah has a multi-year collaborative grant funded by the King Abdulaziz City for Science and Technology in Saudi Arabia through the Center of Excellence for Biomedicine (CEBM) that involves research and training of students from Saudi Arabia. He also leads the collaborative project with Sunway University from Malaysia.